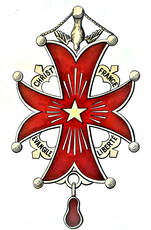 We are a theologically rich and diverse denominations, but what follows is what we all hold to as churches in the RCA.


We believe Jesus, the Son of God, entered our broken world and lived a life that reveals God to us and tells us who we are: beings created by God in God’s image who suffer in a broken world.

Jesus lived a life of perfect obedience to God and suffered and died on a cross to create the way for people to be reconnected to God, as we were created to be. God brought Jesus to life again—defeating death—and Jesus returned to his Father in heaven.
Because Jesus died and rose again, we can live in hope for a better life in this world and in eternity with God.

To connect with this new life and hope, we need to recognize that we have big issues that we can’t fix ourselves, accept Christ’s claim that he is the Son of God and the way to new life, and allow God to lead us into a new relationship with him.
The Reformed Church in America is a confessional church.
​
This means that, as a denomination, we affirm specific statements of belief called creeds and confessions.
Along with most Christian churches, the Reformed Church accepts three creeds that were written in the first few centuries after Jesus' death:In addition, four "standards of unity" tell what the Reformed Church believes: