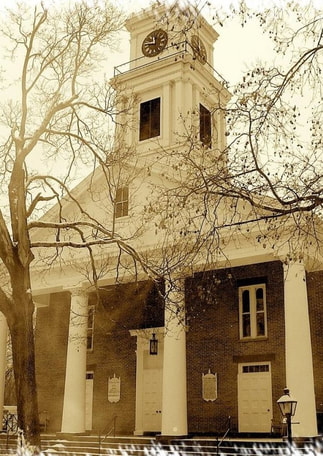 Our congregation is proud of its 336 year history, but also deeply aware of our responsibility to continue to build upon the foundations created by earlier generations of Christians in New Paltz. The New Paltz Reformed Church traces its roots to 1683, five years after the settlement of the village by French-speaking Huguenots from northern France and Flanders who had left their homeland to find religious freedom and a livelihood in the Dutch-settled Hudson Valley. According to a translation of the earliest church record, on January 22 1683, “Mr. Pierre Daille, minister of the Word of God, arrived at New Paltz and preached twice on the following Sunday,” while proposing that the heads of families vote to select an elder and deacon to assist the minister. Worship was in French for 50 years, then in Dutch for some 70 years before English was adopted. (The change from French to Dutch to English can be traced in our church records, many of which are preserved in our document room.) In 1717 the Huguenots of New Paltz began a “stone house of prayer,” a plain building comparable to a Puritan meeting house. (Demolished in the 1770s, the House of Prayer was reconstructed by the local historical society in 1972.) A larger stone church was constructed in the early 1770s; its bell was cast by John Bailey of New York, maker of a battle sword for George Washington.

Our present church, a fine example of Greek Revival architecture with its four-column portico and two-stage clock and bell tower, was erected in 1839. The Rev. Douw van Olinda was instrumental in overseeing successful completion of the 1839 building; in 1833 he had had a prominent role in organizing and building the New Paltz Academy, ancestor of today’s SUNY New Paltz. Transepts and a shallow chancel with central pulpit were added in 1872. In 1952 the chancel was enlarged, and the pulpit shifted to the side, while the communion table was given central prominence. In the 1980s the present fine organ was purchased, and the long-lost Bailey bell recovered and installed near the chancel for acolytes to ring as the call to worship.
The first minister to reside in New Paltz, Stephen Goetschius, was of Swiss heritage and served our church from 1775 to 1796. The first manse built by the church for its ministers is a frame, Greek Revival house erected in 1848 and still standing on Huguenot Street. 1909 saw the completion of the current spacious manse with a pleasant front porch, complementing that of the church next door. Our Wullschleger Education Building, built in 1958, is named for Dominie Gerret J. Wullschleger, who served from 1931 to 1968, and includes classrooms, offices, meeting rooms, the Fireside Room suited for worship and social gatherings, and a spacious basement room currently well-used by our thrift shop, Twice Blessed.

Our church has been led by a succession of dedicated and talented pastors over its long history. They have had varied outlooks--in the 20th century one became a chaplain in World War I, another was a pacifist in World War II--but they are remembered as faithful leaders of their New Paltz flock.
---by William Rhoads

The 275th anniversary of the founding of our church was marked in 1958, by the erection of the Wullschleger Building.  It is located directly across the street from the church and was named in honor of the Rev. Gerret J. Wullschleger, who served our church as minister from 1932-1968.  This building houses the Pastors' offices, Church office, Church School, Fireside room, Fellowship Hall, Youth Lounge, Community Room, Twice Blessed, and Huguenot Cooperative Nursery.
​